This business of visiting a different church every Sunday has brought to a boil several questions that were simmering on the back burner of my mind: "What is church?...What should it be?...Why do we get together?" Lately, as I slip into the back row of a new house of worship each week, another compelling question has surfaced: "If Jesus were visiting churches, where would he feel most comfortable?" In other words, "Where would Jesus attend church?"

The stately Episcopal church with its vaulted ceilings bordered by stained glass windows commemorating executions, consecrations, and coronations of saints, bishops and kings, its organ processionals of white-and-green robed vestry members solemnly brandishing gilded crosses and candlesticks (the leader holding high a golden Bible), its book (copyright 1979) containing verbatim prayers, creeds and psalms that have been recited and intoned every Sunday for decades, if not centuries, the communion rite with its silver chalices and special garments, the reverential bow toward the cross as one approaches, all echo Old Testament images of Hebrew worship. Would Jesus feel like he'd stepped back in time? How would he feel as the object of adoration and cause for pomp?

Or take the genial Presbyterian congregation, with a spacious-yet-warm meeting place full of educated, kind, committed, concerned citizens who want to emulate Jesus and represent him in the world and the neighborhood. (After the service, so many of them stopped to chat and invite us to the greeting hall for coffee and refreshments that by the time we got there, all the cookies were gone.) What would Jesus have said during the Sunday school discussion on poverty, the role of the church and the role of the government?

One recent drizzly evening CP, NS and I visited a church-in-formation. They met in a community center for soup, cornbread and cake before the worship service. The woman in front of me in line had come from Salvation Army, she said, and was glad to be out of the rain. A man with slick gray hair shuffled up to me, mumbling something about getting in line. I let him cut in front of me. He was clearly intoxicated, and soon he and the woman were bickering over who was hogging more food. The congregants were also college students, a few older folks, youngish couples with small children, and every category in between, from stylized-neo-hippie-with-dreds to clean-cut-with-jeans-and-hoodie. I spent most of the sermon time in the improvised nursery playing with Legos, but sensed vitality in the somewhat disorganized gathering. Could Jesus have been slouched on the couch in the back?

What about the informal, yet reflective group of young-to-middle-aged professional folk (plus clumps of college students) who remember him weekly in communion? They sing together, with apparent heart and skill (some of them are even professional musicians) and invite each other home for lunch after every meeting. How would Jesus feel, as a newcomer, pulling a chair up to the circle?

If only I were qualified to answer my own questions, I would know just which church to choose.
Posted by current typist at 1:44 PM 6 comments: 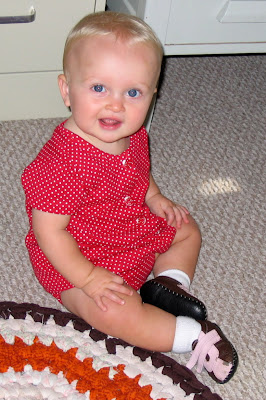 I'm ready for church...what are you waiting for? 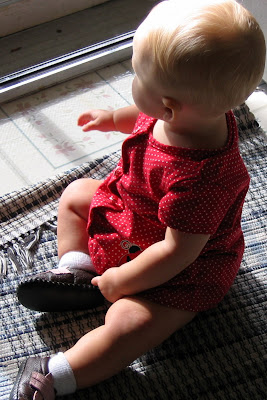 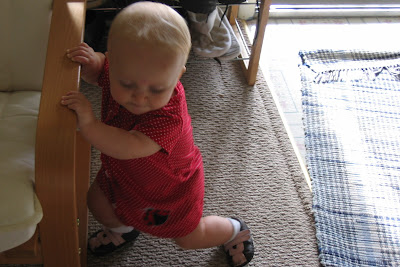 Here's how it's done.

NS' favorite playthings these days are books, especially the big picture books with rip-able pages. (We've relocated those to a less tempting spot in the apartment.) Board books are plenty of fun, though, and they're all on a reachable shelf.

If you turn up the volume and listen closely, you'll hear her chortling to herself as she peruses a book with photos of babies.

Yesterday was NS' nine-month birthday. If you set aside the mythical nature of the nine month pregnancy and ignore the fact that not every month has exactly 28 days, yesterday marks the point at which she was ex utero for the same amount of time that she was in.

It was only last night, on one of the random thought trains that crisscross my brain while I'm groggily slumped in the recliner with NS for one of her nocturnal feedings, that it came to me how to use my baby wrap to sling her to my hip. It's how I tend to carry her anyway--usually on the left hip, leaving my dominant right hand free to unlock the car, heft grocery bags, or retrieve the mail. Holding her in that position, I'd wrap the fabric diagonally from hip to shoulder, imitating the handy one-piece sling I tried out at a family reunion last summer.

The revelation was timely, because I'd been puzzling over how to take NS to the local library's used book sale. When she was about four months, I took her to our former library's sale. Thanks to the masses of fellow greedy book seekers who turned out on the first day, I could barely maneuver myself, much less a stroller, among the tightly packed tables. I parked the stroller and tied her to my front, face out.

Now that she's twice as heavy, new measures are required to tote her with any comfort during potentially grueling missions like book hunting. Today was the second day of the library book sale. The children's section (the reason I went) was somewhat disappointing, though we did go home with a dozen books for $3.

In the paperback aisle a woman struck up a one-sided conversation with NS, who was wearing flower-studded denim overalls and had pink and purple flowers up and down her sleeves.

At this point in such conversations, which happen rather often, a split-second judgment is required. Will the immediate awkwardness of correcting the stranger's interpretation of my child's gender prevent further awkwardness later? Or will the conversation only last a moment, rendering a correction irrelevant?

"She's a girl, nine months," I coated it with a sugary smile.

"Of course, I should've noticed the pink on her shoes." Predictably, the woman went on to compliment NS' eyes, and noted the main reason for her boyish impression: not much hair.

I've read that most babies start crawling at six to nine months of age, and most sprout teeth between two and twelve months. Although none of the books mention it, society at large tacitly agrees that girls are supposed to be bouncing long ringlets by three to nine months of age.

"Children's books," the elderly volunteer commented as I stacked my loot on the checkout table. "It's a little early for him to be reading these."

I managed a feeble courtesy smile. "It's never too early to start reading."
Posted by current typist at 6:05 PM 4 comments: 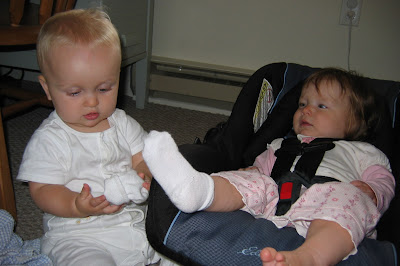 NS can turn almost anything into a toy, even her friend's sock. 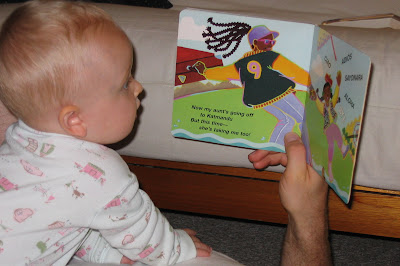 My Aunt Came Back ranks officially on NS' Favorite Books List. We miss you, Auntie HB! 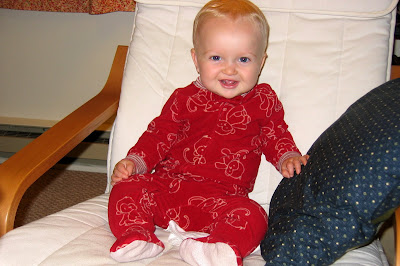 Full of morning happiness, NS lounges in her plush red monkey suit (thanks, Auntie GG). I often call her "Curious N" ("N la curiosa"), so the suit fits her perfectly. 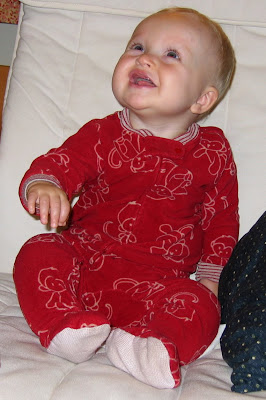 Doesn't she even kind of look like the inquisitive little monkey? 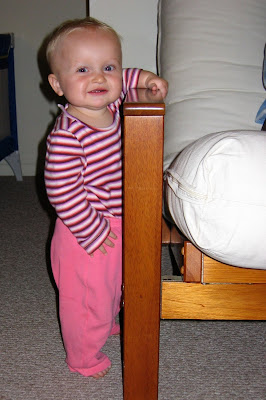 She's finally figured out that cameras are for cheezin' it up! 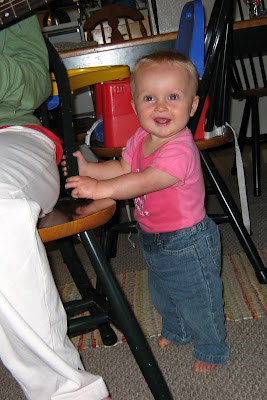 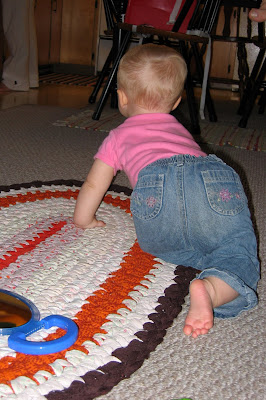 Best new food: Curried quinoa. OK, so quinoa's not 100% new to me. I had tried this quirky un-grain before, introduced by a roommate with food allergies, but I don't think CP had, and it was definitely NS' first taste. (I figured it was time to give her a non-wheat break from oatmeal and rice.) But it qualifies as new due to my very limited experience with it.

As it turns out, this stuff is protein-packed and really, really good for you. Other reasons to try quinoa: 1) It looks funny, like little seed-coils. 2) It has a unique texture, soft-crunchy-chewy. 3) It tastes lovely when curried, and probably in lots of other dishes yet to be explored.
Posted by current typist at 8:36 PM 1 comment:

Adding my three cents to the fray of recipe blogs, allow me to feature a few of the winning seasonal efforts from my kitchen in the past couple of weeks. (Sorry, no photos. You'll have to use your imagination.)

Best salad: This is my invention, adapted from several different sources. All quantities are approximate. You can experiment with dicing or chopping sizes to vary the texture. You can also try changing the ingredient ratios to make certain flavors more prominent (e.g. more apples for a sweeter salad).

Add to desired consistency and taste:

Best dessert: Unfortunately, I can't take credit for this one. CP was the inspired baker who substituted fresh red raspberries for sour cherries in a recipe from my mom. His modifications are in parentheses.

The results? Let's just say that I'd be very embarrassed to tell you how much of the double batch I consumed in one sitting.

"We've entered a new era," I announced yesterday to CP. "The era of of saying 'no'."

And so the day has come. Sweet little NS is--suddenly, it seems--exercising her new powers that lead to all kinds of no-no's, from rolling over on the changing table to pulling on electrical cords. Though I've tried to baby-proof our one-bedroom flat, I'm discovering to my dismay that there is no such thing as 100% baby-proof.

Today I caught her crawling forward, just a couple of paces at a time, across slippery kitchen linoleum. Then she started reaching for the cupboards. Note to self: Install cupboard safety locks tomorrow! 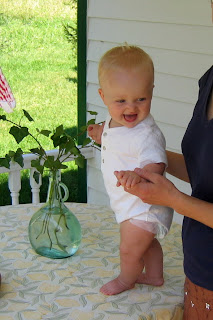 This is the flower bed in my backyard (the trash can is not normally there). 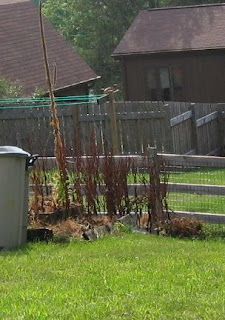 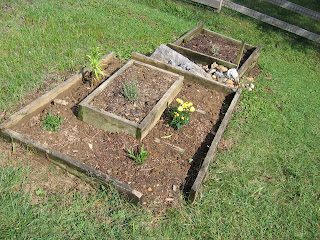 Mom brought me some perennials--daisies, yellow cone flowers, lavender, Russian sage--and I added a mum and tiger lily (?) that were already on hand.

In the vegetable garden, the victory is that some veggie seeds actually germinated--cabbage, carrots, beets, lettuce, spinach--albeit in mostly in woefully tiny numbers. I'm not including a picture because all you would see is the grass that keeps trying to reclaim its habitat.

The most impressive sight is that of a dozen broccoli plants, courtesy of my parents-in-law, that arrived from out of state with their roots packed neatly in damp newspaper tied with bailing twine.
Posted by current typist at 2:55 PM No comments:

I got to raid relatives' gardens twice in one week. I felt like a jackpot winner, suddenly loaded down with bags and boxes of fat beets, zucchini boats, green home-grown celery--roots and all (I'd never even seen such a curiosity), freshly dug red potatoes, feathery Italian parsley, bouquets of rainbow chard, fragrant peaches, voluptuous red raspberries, and pungent tomatoes of every ilk. For the moment, my little fridge-top freezer is packed, and there are still plenty of fresh produce meals on my "to make" list.

Hats off to the generous gardeners.
Posted by current typist at 2:44 PM No comments: