Monday:  Oh, happy day!  The diapers are finally packed away!

Tuesday: An unexpected autumn joy: fresh salad! The lettuce re-seeded in a thick springy carpet of baby greens. I yanked some and savored it with garden tomatoes, radishes, peppers, and even bits of late green beans.
Posted by current typist at 12:37 PM No comments:

Tonight as CP prepared dinner, the nasal melancholy of Willie Nelson's "The Last Thing I Needed First Thing This Morning" wafted up the stairs, "...The alarm clock rang two hours late...And this morning at breakfast/I spilled all the coffee," etc.  From the bathroom I heard NS exclaim with a laugh, "Mom! That music is sorta funny!"

Earlier this week, NS demonstrated her comprehension of the danger of going near the road.  I asked her to walk with me to take a letter to Dad and Mom's mailbox, which is on the other side of a busy rural thoroughfare.  As we left the house, hand in hand, she slowed and said seriously, "I don't want to go on the road because a car might bump me. Then I would be dead and we wouldn't have any girl."
Posted by current typist at 7:06 PM 3 comments:

Familial Influence and the Slippery Slope of Confection

Way back in March, my sister-in-law documented on her infamous blog the perfection of whoopie pie filling.  Last summer, as a honeymoon send-off treat for my newlywed sister and brother-in-law, Mom and I whipped up a batch of whoopie pies.  I suggested we try out the new filling recipe that boasts no egg whites and loads of butter.  We searched out the online recipe, copied amounts and multiplied them meticulously.

Much to our chagrin, we overlooked the instruction to mix in the butter and sugar "when the milk has cooled to room temperature" and ended up with a triple (or quadruple?) batch of rich, runny icing that undoubtedly would not have stayed between its chocolate layers. Mom sent me home with a large container of the botched batch, which sat in my freezer for several months.

Several weeks ago, at an annual gathering of my husband's female relatives and honorary relatives, my mother-in-law was singing the praises of pretty layered cakes like the ones they made for her parents' anniversary bash some years back.  Fancy, frosted layer cakes may be worth gold at the corner bakery these days, but they're common fare in my mother-in-law's kitchen. When I got home and spied the glass cake plate she'd given me, I was inspired.

With visions of a whoopie pie cake daintily perched on its crystal stage, I went to work, making the simplest chocolate crazy cake in my repertoire and unearthing the runny icing from the deep freeze.

The results, though tasty, were precarious at best... 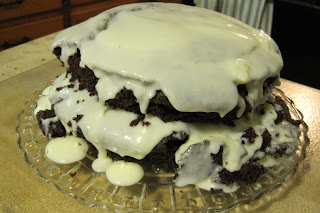 ...and soon resembled an earthquake zone. 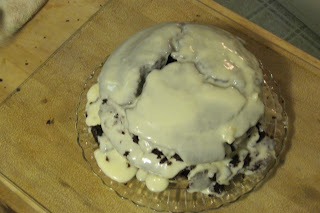 I scrambled to move it to a more stable location... 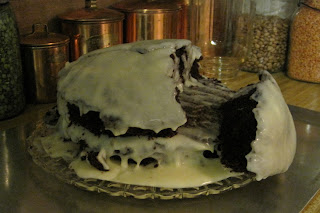 ...before the top layer's demise was complete. 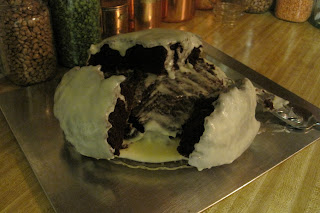 Thanks, sis-in-law J, mom, and mom-in-law for your respective roles in teaching me that layer cakes are not my forte!
Posted by current typist at 6:59 PM 6 comments:

Auntie A played wheel barrow with NS last week when she and Uncle D came for supper. 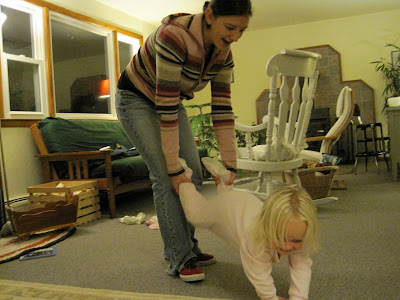 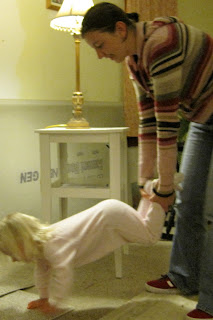 Last week NS announced, "Mom, I'm going to paint my toenails blue."  And she did, aided only by a blue marker (fortunately, not permanent). 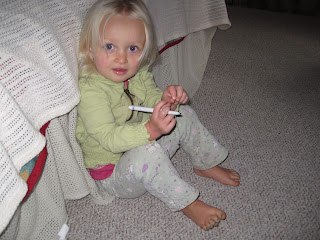 Then she proceeded to "paint" her fingernails, too. 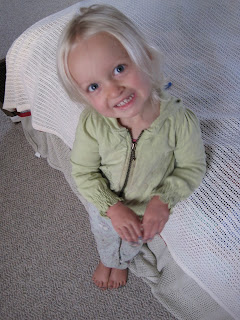 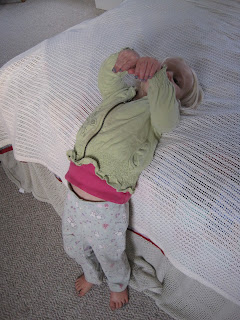 She and I had a grand time at her Grandpa and Grandma's place this week.  She got her first quilting lesson! 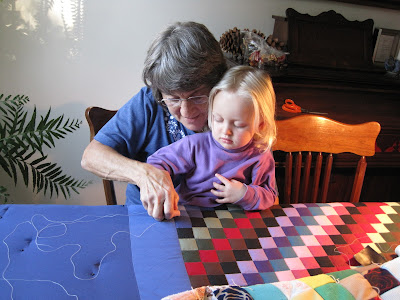 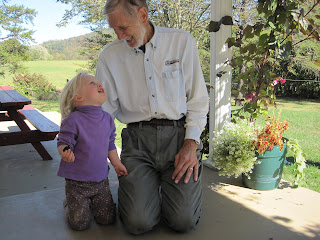 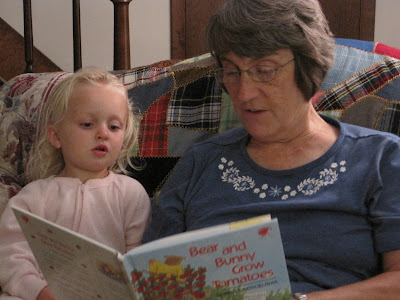