Friday:
The sky looked ominous; CP's last day of pre-Christmas school was shaved off an hour early in anticipation of the Big Snow. Nonetheless, at 5:00 I was all geared up for my choral society's Christmas concert. Supper was in the oven, childcare arrangements were made, and my black choir dress was laid out on the bed. As I reviewed the directions over the phone for CP's brother and parents who were en route to the concert, the stunning proclamation arrived via email: the concert was canceled! They changed course for our house, ducking in out of the already-swiftly accumulating snow. Overcome with excitement, NS zipped about, talking three times too loudly. My sister-in-law's family (the Ms) from half a mile away announced their a surprise visit by pummeling the house with snowballs. Inside and outside the frosty doorway, we sang "Happy Birthday" to Grandmommy and "We Wish You a Merry Christmas" to each other. After they went on their way, we cozied around the fire and turned in early.

Saturday:
We woke up to snowfall and all day watched it fill up the world. Shoveling was a strenuous exercise in futility, as the wind swiftly drifted and masked our paths. CP burned the brush pile in the pasture--something we'd often talked about doing in conjunction with a hot dog roast and sledding party--but the snow was too deep and fluffy for sleds, and there was no way we could get to a store for hot dogs. A walk to the compost pile through knee-high snow left me breathless.

Apart from a frightening lunchtime episode of back pain on the part of my father-in-law, the day floated on in suspense, a hush in the clamor of routine obligations. The mail did not arrive.

Evening time brought the Ms back over the 0.6 mile trail lugging baskets of turkey, gravy, stuffing, three cranberry sauces, and a stellar array of Christmas cookies and candies. After they shook the snow off, everyone gathered around the festive table for a feast including green beans, baked corn, and mashed potatoes...and, of course, another round of "Happy Birthday."

Sunday:
Church services were canceled. CP, Z and I got to work on the driveway. Fortunately, the neighboring farmer had plowed the lane up to our gate, so we only had to dig out a path for the cars from the house to the gate. It was a three-person job, especially given the measly tools--one smallish snow shovel, a dirt shovel, a bedraggled broom. I used my boots more than anything. Late morning we were able to get the cars out and trek over to the Ms' house to tank up on nourishing chili and luscious, homemade glazed donuts. As JJ observed, we lived fully during these snowy days! 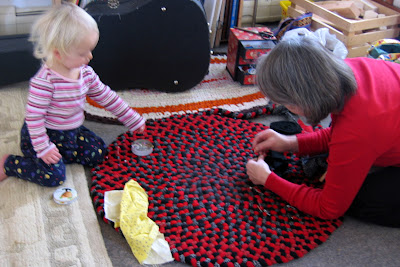 Drifting made it hard to determine snow depth, but it was around two feet: 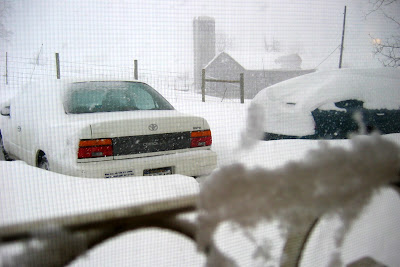 Some drifts were waist-high (on me): 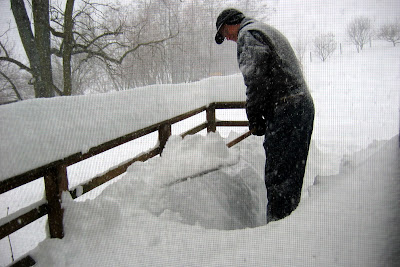 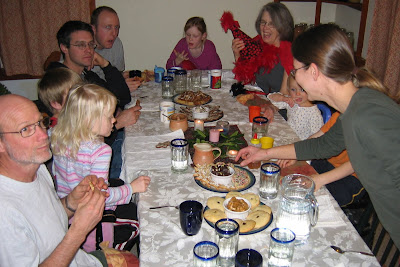 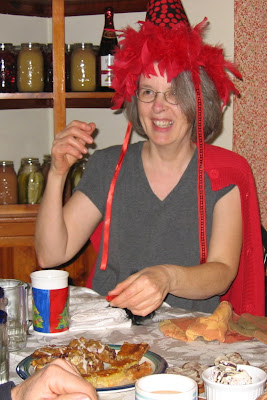 Posted by current typist at 4:18 PM No comments:

Posted by current typist at 3:50 PM No comments:

Bedtime story with Papi (a.k.a. Daddy): 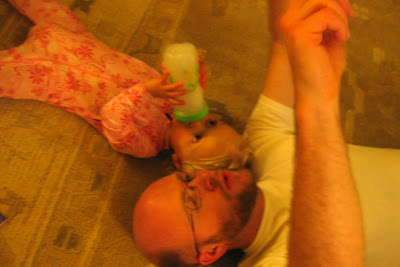 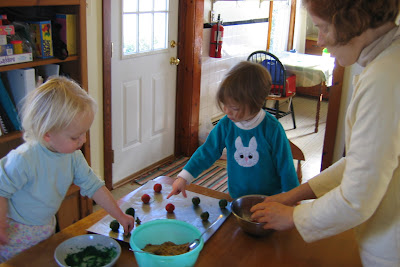 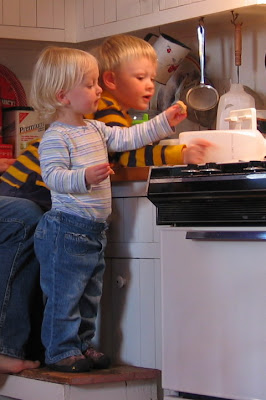 Even on the chilliest days, sometimes this is the outfit of choice: 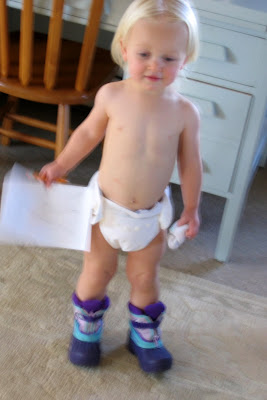 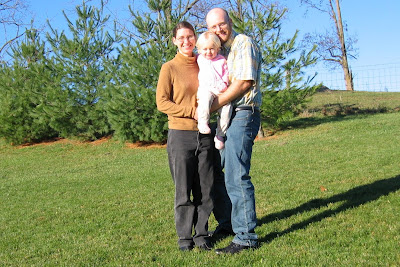 Hair styling (this occupied her for probably half an hour one evening): 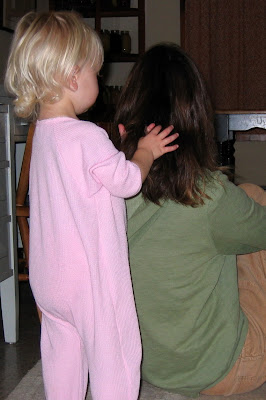 Fashion show (in case you can't tell, it's a backward sleeper with a shirt for a do-rag): 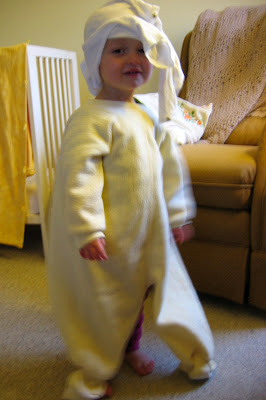 Posted by current typist at 1:55 PM No comments:

...toddlers giggle and ask for more. At least when it's a snowball fight.


Posted by current typist at 4:11 PM No comments: